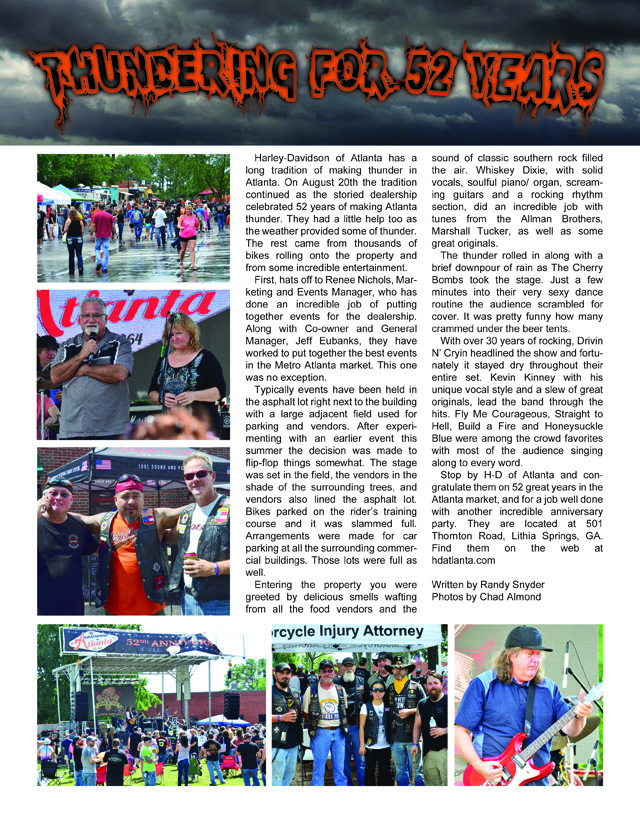 Harley-Davidson of Atlanta has a long tradition of making thunder in Atlanta. On August 20th the tradition continued as the storied dealership celebrated 52 years of making Atlanta thunder. They had a little help too as the weather provided some of thunder. The rest came from thousands of bikes rolling onto the property and from some incredible entertainment.

First, hats off to Renee Nichols, Marketing and Events Manager, who has done an incredible job of putting together events for the dealership. Along with Co-owner and General Manager, Jeff Eubanks, they have worked to put together the best events in the Metro Atlanta market. This one was no exception.

Typically events have been held in the asphalt lot right next to the building with a large adjacent field used for parking and vendors. After experimenting with an earlier event this summer the decision was made to flip-flop things somewhat. The stage was set in the field, the vendors in the shade of the surrounding trees, and vendors also lined the asphalt lot. Bikes parked on the rider’s training course and it was slammed full. Arrangements were made for car parking at all the surrounding commercial buildings. Those lots were full as well.

Entering the property you were greeted by delicious smells wafting from all the food vendors and the sound of classic southern rock filled the air. Whiskey Dixie, with solid vocals, soulful piano/ organ, screaming guitars and a rocking rhythm section, did an incredible job with tunes from the Allman Brothers, Marshall Tucker, as well as some great originals.

The thunder rolled in along with a brief downpour of rain as The Cherry Bombs took the stage. Just a few minutes into their very sexy dance routine the audience scrambled for cover. It was pretty funny how many crammed under the beer tents.

With over 30 years of rocking, Drivin N’ Cryin headlined the show and fortunately it stayed dry throughout their entire set. Kevin Kinney with his unique vocal style and a slew of great originals, lead the band through the hits. Fly Me Courageous, Straight to Hell, Build a Fire and Honeysuckle Blue were among the crowd favorites with most of the audience singing along to every word.

Stop by H-D of Atlanta and congratulate them on 52 great years in the Atlanta market, and for a job well done with another incredible anniversary party. They are located at 501 Thornton Road, Lithia Springs, GA. Find them on the web at hdatlanta.com