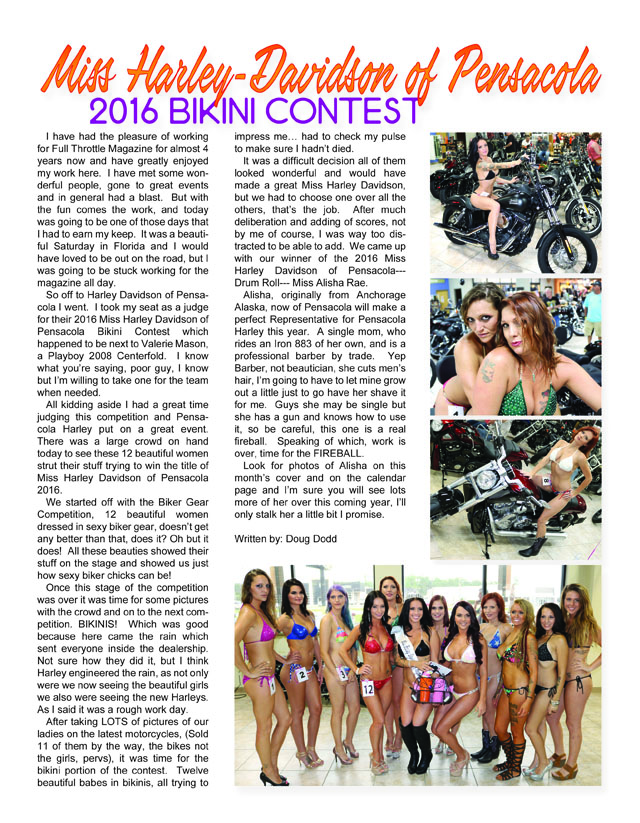 I have had the pleasure of working for Full Throttle Magazine for almost 4 years now and have greatly enjoyed my work here.  I have met some wonderful people, gone to great events and in general had a blast.  But with the fun comes the work, and today was going to be one of those days that I had to earn my keep.  It was a beautiful Saturday in Florida and I would have loved to be out on the road, but I was going to be stuck working for the magazine all day.

All kidding aside I had a great time judging this competition and Pensacola Harley put on a great event.  There was a large crowd on hand today to see these 12 beautiful women strut their stuff trying to win the title of Miss Harley Davidson of Pensacola 2016.

We started off with the Biker Gear Competition, 12 beautiful women dressed in sexy biker gear, doesn’t get any better than that, does it? Oh but it does!  All these beauties showed their stuff on the stage and showed us just how sexy biker chicks can be!

Once this stage of the competition was over it was time for some pictures with the crowd and on to the next competition. BIKINIS!  Which was good because here came the rain which sent everyone inside the dealership.  Not sure how they did it, but I think Harley engineered the rain, as not only were we now seeing the beautiful girls we also were seeing the new Harleys.  As I said it was a rough work day.

After taking LOTS of pictures of our ladies on the latest motorcycles, (Sold 11 of them by the way, the bikes not the girls, pervs), it was time for the bikini portion of the contest.  Twelve beautiful babes in bikinis, all trying to impress me… had to check my pulse to make sure I hadn’t died.

It was a difficult decision all of them looked wonderful and would have made a great Miss Harley Davidson, but we had to choose one over all the others, that’s the job.  After much deliberation and adding of scores, not by me of course, I was way too distracted to be able to add.  We came up with our winner of the 2016 Miss Harley Davidson of Pensacola— Drum Roll— Miss Alisha Rae.

Alisha, originally from Anchorage Alaska, now of Pensacola will make a perfect Representative for Pensacola Harley this year.  A single mom, who rides an Iron 883 of her own, and is a professional barber by trade.  Yep Barber, not beautician, she cuts men’s hair, I’m going to have to let mine grow out a little just to go have her shave it for me.  Guys she may be single but she has a gun and knows how to use it, so be careful, this one is a real fireball.  Speaking of which, work is over, time for the FIREBALL.

Look for photos of Alisha on this month’s cover and on the calendar page and I’m sure you will see lots more of her over this coming year, I’ll only stalk her a little bit I promise.