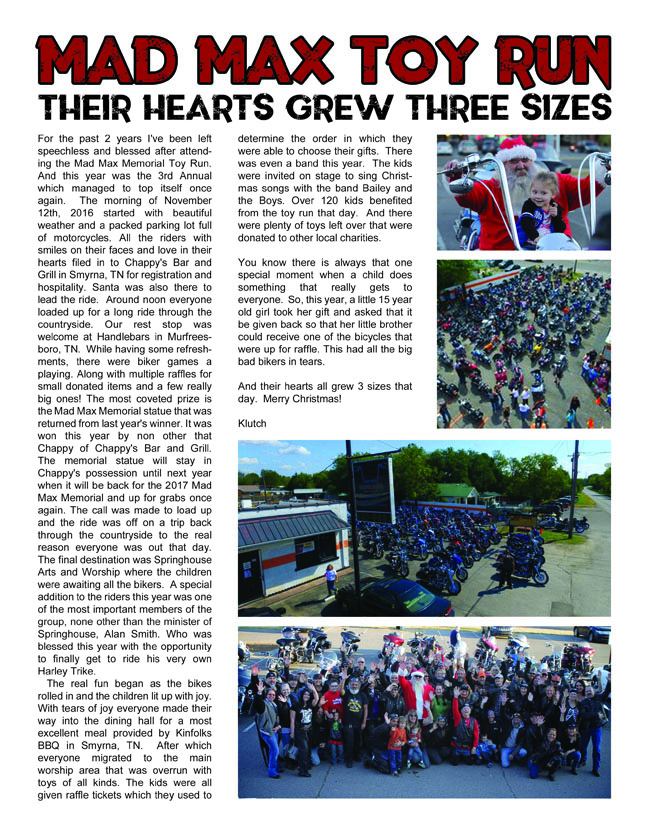 For the past 2 years I’ve been left speechless and blessed after attending the Mad Max Memorial Toy Run. And this year was the 3rd Annual which managed to top itself once again.  The morning of November 12th, 2016 started with beautiful weather and a packed parking lot full of motorcycles. All the riders with smiles on their faces and love in their hearts filed in to Chappy’s Bar and Grill in Smyrna, TN for registration and hospitality. Santa was also there to lead the ride.  Around noon everyone loaded up for a long ride through the countryside. Our rest stop was welcome at Handlebars in Murfreesboro, TN.  While having some refreshments, there were biker games a playing. Along with multiple raffles for small donated items and a few really big ones! The most coveted prize is the Mad Max Memorial statue that was returned from last year’s winner. It was won this year by non other that Chappy of Chappy’s Bar and Grill.  The memorial statue will stay in Chappy’s possession until next year when it will be back for the 2017 Mad Max Memorial and up for grabs once again. The call was made to load up and the ride was off on a trip back through the countryside to the real reason everyone was out that day.  The final destination was Springhouse Arts and Worship where the children were awaiting all the bikers.  A special addition to the riders this year was one of the most important members of the group, none other than the minister of Springhouse, Alan Smith. Who was blessed this year with the opportunity to finally get to ride his very own Harley Trike.

The real fun began as the bikes rolled in and the children lit up with joy.  With tears of joy everyone made their way into the dining hall for a most excellent meal provided by Kinfolks BBQ in Smyrna, TN.  After which everyone migrated to the main worship area that was overrun with toys of all kinds. The kids were all given raffle tickets which they used to determine the order in which they were able to choose their gifts.  There was even a band this year.  The kids were invited on stage to sing Christmas songs with the band Bailey and the Boys. Over 120 kids benefited from the toy run that day.  And there were plenty of toys left over that were donated to other local charities.

You know there is always that one special moment when a child does something that really gets to everyone.  So, this year, a little 15 year old girl took her gift and asked that it be given back so that her little brother could receive one of the bicycles that were up for raffle. This had all the big bad bikers in tears.

And their hearts all grew 3 sizes that day.  Merry Christmas!