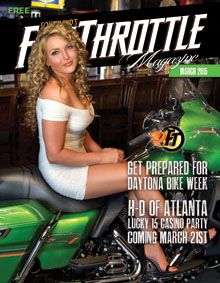 Full Throttle Magazine for Motorcycle Enthusiasts began in Florida as the brain child of Paul Allen Cianci in 1996. The original publication was black and white newsprint with a gloss full-color cover. While there were a few regional motorcycle publications around at the time, none quite hit the mark. Paul recognized that he had hit on the winning formula of making the magazine regional and making it about the people that lived in the region, their motorcycles, and the rides and events that they loved to attend.

Soon a Georgia edition was launched by Paul’s good friend Harry Bazarian. Soon a Carolina’s edition owned by Mark and Molly Infield hit the streets. Before long there were several Full Throttle Magazine titles across the USA. As in most businesses, some came and went; one was taken out by Hurricane Katrina. But the lasting story is the success of Full Throttle Magazine and its rock solid foundation of its current long lasting regional publications.

In 2001 the Georgia book was bought by Randy Snyder. In 2003, he bought and merged Georgia with the Alabama edition and renamed it Southland’s. In 2008, Mr. Snyder purchased the rights to Full Throttle Magazine from Mr Cianci. The parent company is now FULL THROTTLE USA, LLC. It was also at that time that Tennessee was added to Southlands mix. It now covers all of AL, GA, TN and FL Panhandle.

What is Full Throttle Magazine?

A key feature of Full Throttle Magazine for Motorcycle Enthusiasts is its Cruisin’ Calendar. Several pages of each issue are dedicated to providing a free calendar of events where readers can plan activities. Full Throttle Magazine readers depend on the publications for planning where to spend their nights, their weekends and even their vacations.