It’s around 6pm and I’ve just arrived in a subdivision tucked back in a small neighborhood. The meeting place is a small shed like area, probably no bigger than 15×15… just enough space to pack in a few motorcycles, chairs, a working bench and an assortment of collectables from years back. Included in this assortment are framed and unframed pages from other well-known magazines where the two men I’m meeting with have been featured in.

The two men are Tim Quick, and Curt Green. This meeting and introduction has been a long time coming, and finally, as the sun sets and day turns to night we sit back and get acquainted with each other, and I get the opportunity to see some of the great work that these two guys have produced over the years, and talk about their history together.

Tim Quick started in the leather business over 40 years ago, with his first introduction to leather work at the hands of his grandfather who worked in the saddle business. He was also a blacksmith, and he made his own tools. Tim was 6 years old. At the age of 16, Tim saddled his first motorcycle. As he progressed, his work from growing Outlaw Customs captured the attention of over 62 print publications featuring his work over the years.

Unfortunately Tim suffered some health setbacks and had to undergo kidney dialysis. Knowing that he couldn’t keep up with the incoming work, he began searching for an apprentice, someone he could, as his grandfather did, teach him about working with leather, and designing custom seats. 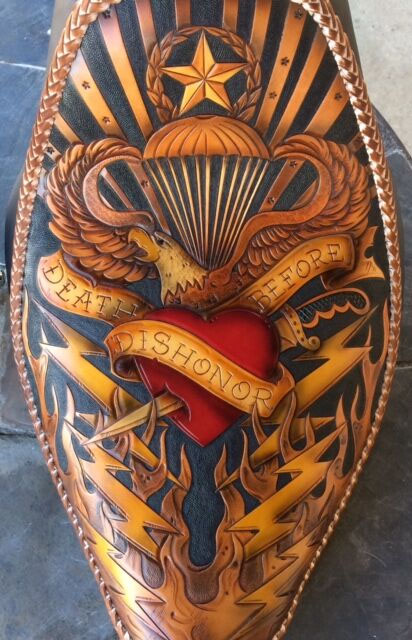 Tim had attended a Twisted Throttle party one night and was introduced to Curt Green. Curt had an illustration background, and was familiar with airbrushing. After talking for a time, Tim encouraged Curt to drop by the shop and show his portfolio of work. Once Tim saw the level of design Curt could produce he realized that Curt had exactly what he was looking for-a creative mind, the ability to draw, and an eagerness to learn leather craft.

In the beginning stages of training, Tim would provide Curt with scraps of leather for him to test his skills. He also provided him his first tools which consisted of 2 bits, a knife, and hammer. Over a short period of time, Curt demonstrated that he was the person Tim was looking for, and in 2008 Tim invited Curt to begin working with him. In less than a year, Curt completed his first custom seat.

Curt’s illustrative capability accompanied with his airbrushing talent brought a new dimension to seat design. By applying tints, dyes, inks and paint to once flat surfaces, shadowing, color and contrast allowed for more advanced creative options to explore. With each project completed, the level of skill and design increased as did the popularity of the product. More people began searching out Curt’s work, and more motorcycles across the country were being fitted with his art.

Since Tim has been overcoming his health issues, he decided to transition work from Outlaw Customs, to Curt. Bare Bones Leather was created. Curt and Tim still get together on a regular basis to talk about projects, ideas, and stories. Some of these sessions might come after a long day of work, or in the middle of the night. And as these sometimes do, a phone can be heard ringing in the distance, and in a matter of minutes the two will be discussing the next great idea waiting to be created for a customer.

It’s interesting enough to say that when either of them explore the options for a client, they seem to instinctively know what that seat design will look like. And no matter what the client wants, it is delivered. Curt mentioned a recent call from a client in San Francisco who said he didn’t think anyone could complete the design he was asking to be done. Curt’s response was short and to the point… “I can do it.” Enough said, the client was in, and ready for work to commence. No doubt the piece will be a one of a kind, because no two seats are identical, each one a custom work of art. But don’t refer to Curt or Tim as “artists.” That term they reserve for the masters like Michelangelo, and Da Vinci. Curt is more comfortable with the description of “Blue Collar Artist”, and that might be more fitting, but one thing is for sure, the finished product will leave a lasting impression on those who get the opportunity to see their genius. And yes, this is art you are encouraged to touch and feel.