The Harley-Davidson dealership in Cartersville, GA did more than rock in a new name on March 21, they rode into a whole new era. They were celebrating the Grand Opening of the newly branded Southern Devil Harley-Davidson.

Mustang Sally, one of the fan favorites on the motorcycle rally circuit, brought their rocking country style to a huge crowd. The band is well known for the overall core of the band being an all female lineup. It was probably no coincidence that they were playing for the Grand Opening of a dealership ushering in a new era with female ownership and a female management team.

Kimberly Hulsey, owner of Southern Devil H-D and Hellbender H-D, is committed to treating the needs of each individual customer. The dealership remains family owned and operated, and is also committed to supporting the local communities. The Wounded Warrior Project has been selected as a charity of choice for both locations. “It is a privilege to help the people who have sacrificed so much in service to our country,” said Kimberly.

The new name is the most obvious part of the dealership’s new era and on the surface opens a lot of questions and comments. Don’t worry folks, there is nothing demonic taking place. The Southern Devil is simply a small non -aggressive scorpion, while the Hellbender is a salamander. Both are native species to Georgia further anchoring the stores’ commitment to their home State and communities. 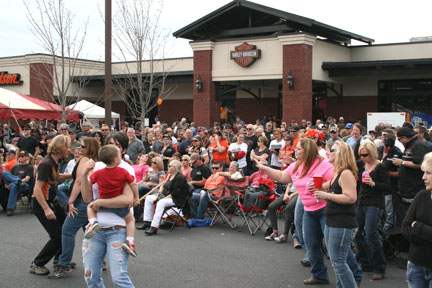