Full Throttle Magazine has been involved with the rallies in Panama City Beach since 2002. We first came down and stayed in an old hotel with stinky carpet over by the Hathaway Bridge. We had really moved up a step when we moved to the Islander Hotel, (now on an empty lot across from Grand Panama) where out Freaky at the Tiki Party was born.

About 40-50 guests and friends gathered by the pool on a Friday afternoon. JB Walker and the Cheap Whiskey Band were playing poolside with water splashing under their feet. The splashing came from an impromptu cannonball contest from atop a trash can flipped upside down. A winner was never declared as management didn’t think the drunken cannonballs were such a good idea. Shoot, the event grew there to the point where we hosted our own low country boil. 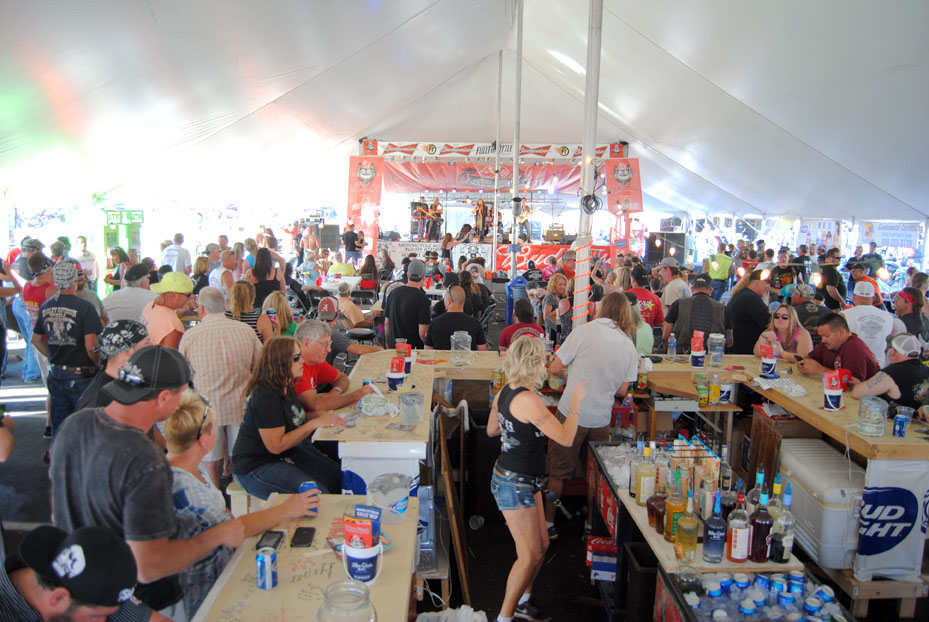 The rally had grown from just a couple thousand people to around 20,000 when we made the move to the Boardwalk Beach Resort. Initially, as a Title Sponsor of Thunder Beach. We moved the Thunder Thursday bike show from Shuckums, the Freaky party grew and it became our home base for many years. Even as Thunder Beach Productions thought they had better ideas we stuck with the Boardwalk and continued to develop ideas and events.

During the spring of 2014 another gamble was made. The LUCKY 13™ venue was born and this became the new home base for Full Throttle Magazine. The Thunder Thursday Bike Show, Freaky at the Tiki Party, and the infamous Strongman Competition have survived and strived at the venue. Not just that, the crazy cat logo of The LUCKY 13™ has come alive and taken on a life of its own.

The LUCKY 13™has worked hard to become the place “where bikers come to play in PCB” and has accomplished that goal. Now also known as “the first venue to open and the last to close” people have discovered now where to go for a good time. With live entertainment every day, lots of fun and crazy games, and top notch vendors, it is the place to be in PCB.

Sus Mathers and Jesse Jones, both local PCB accomplished musicians, got each day started with great acoustic performances. With contrasting vocal and guitar styles, they rotated sets which added variety to the day’s early performances. Sticks-N-Stones, also from PCB got rained out on Monday but came on Tuesday and rocked it. Sin Seven completed our lineup of PCB bands when they hit the stage on Wednesday night opening for Ricky Gunn.

Ricky, a Columbus GA boy, and his killer band, came out and stomped it with great country covers as well as tunes off his new album, King of This Town. The band is entertaining as they are good and really captured the crowd. They were back on Thursday with a killer opening set getting the crowd ready for The Southern Gothic, but not before the house band from Cowboys in Dothan, JT Curtis and the Florida Scoundrels got the party started.

Recently rebranded from Connor Christian and Southern Gothic, this band based out of Atlanta is fantastic. Incredible musicianship with matching vocal performances set the country/ Americana tone. Having a beautiful and sexy fiddle player doesn’t hurt either. There Thursday night performance was the backing track for the Thunder Thursday Bike Show and Party. 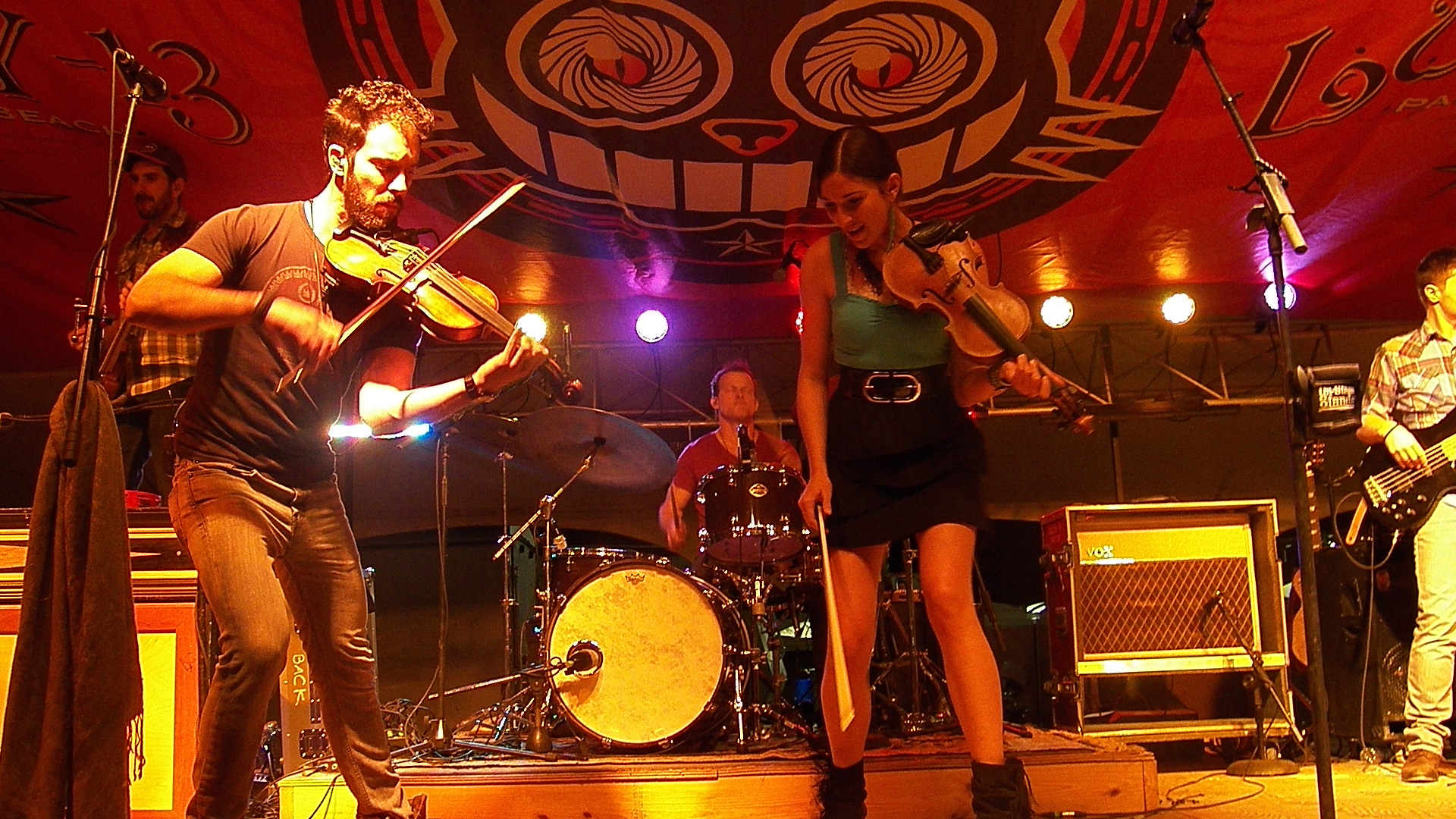 Jeff Daniels was the big bike show winner of the night. Taking home the $1000 Best in Show money sponsored by Lawbike.com.

The Freaky at the Tiki Party on Friday is always fun. Making it even more fun was the party band No Sweat. These guys rock and entertain, making them the perfect choice for an afternoon band. Throw in some plunger races, team rope races, and other party games, and you have a great way to spend an afternoon.

The Southern Gothic was back on Friday night to open for Jasmine Cain. Before Jasmine hit the stage what has become and will remain a tradition for The LUCKY 13™was the playing of The Star Spangled Banner followed by a prayer. This was done each night before the headliners, on a couple nights the venue bought drinks for all veterans in attendance.

Saturday brought another gorgeous day and a slate full of activities. No Sweat was back to rock the Kentucky Derby party. The race was on the four TVs which are part of the Budweiser portable bar set up in the upper lot. In the main tent the Flip Cup races were held in honor of the race. Each team of five, one at a time, had to drink a beer, set the cup on edge of table and flip it to land upright. It was pretty hilarious.

It was a busy Saturday. Ride Like a Pro did demonstration rides, Davey Dave did a burnout show, and there was a motorcycle and Pitbull lift giveaway. The 2000 Fatboy Custom was raffled with all proceeds going to the family of Willie Prather. He was a former FT employee, as well as longtime friend of the motorcycle community. All $10,000 from the raffle have been given to the family. The bike was won by Sheryl Hill of Chamblee, GA. Registration for the lift was made by texting a keyword. Over 400 registered over the weekend with the winner being Ashley Smith from West Point, GA.

Faith Jackson Band took the stage to kick off the night. Her rocking country style set up the night for Jasmine Cain’s metal edge. Jasmine did a kick ass job opening Friday, but on Saturday night put on a show. It was a great way to close down the week’s musical lineup. 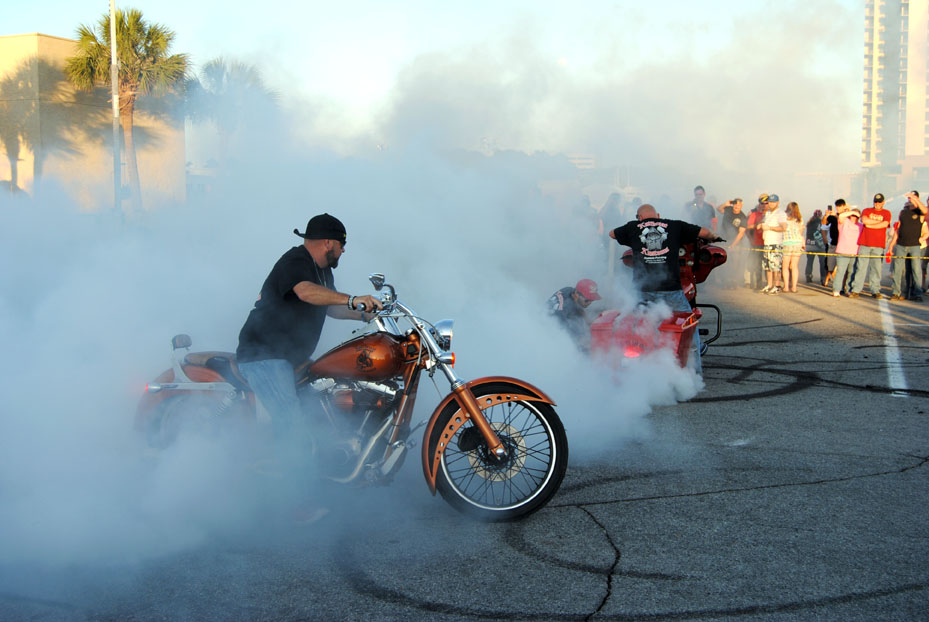 With over 60 vendors it is hard to talk about them all. The L13 staff has worked hard to bring in product you don’t find everywhere and to cull out less desirable, cheaper items. There was a vendor doing laser engraved glass products, laser cut wood signs, man cave and unique household items, high quality boots, and custom made leather wear. You name it, you could find it. Most vendors did better in sales in a few days in PCB than they did in two weeks in Daytona.

The addition of an all you can eat breakfast buffet Thursday through Saturday makes The LUCKY 13™ the perfect place to start and to end your day. There was a huge returning crowd who spent most of the rally hanging at the venue because it truly has become “where bikers come to party in PCB.”