The 18th annual Bainbridge (GA) Bikefest rocked the Bainbridge Bikefest Grounds September 16-20. The Bikefest is a non-profit, volunteer run organization dedicated to giving to charities. Over the years it has given approximately  $800,000 to charities due to the efforts of sponsors, participants, and the local community. These charities include national charities such as Juvenile Diabetes, Salvation Army and Shriners. Many local charities have benefitted as well including scholarships at Bainbridge High School, Friendship House, and local residents in need. 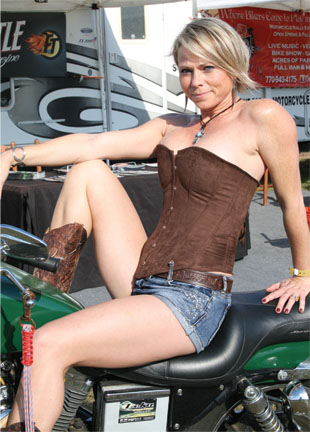 Bainbridge Bikefest is not owned or affiliated with any group, organization or motorcycle club and is put on solely by volunteers.  These volunteers are made up of local citizens as well as people from surrounding counties and even other states. These volunteers donate tremendous amounts of time to make this event successful.
The Bikefest grounds are gorgeous with well planned camping facilities. Many of the sites have full electric connections with up to 50-amp service for large campers and RVs. There is plenty of primitive camping too. After all the property is a couple hundred acres. The place can hold a lot of people.
Bainbridge Bikefest is a four-day event and each day has incredible entertainment. This year Shane

Owens, Exile, Southern Outlaw Band, Leah Seawright, Skinny Molly, Eli, and many others rocked the huge stage. On Saturday morning there was a Veterens Cermony and Bike show on the town square. Biker games were Friday and Saturday and went throughout the day. Some of the games became golf cart games. If there is a drawback it would be the number of carts running around it. With on-site rentals and many with their own carts, there were a lot of carts on the grounds.
In all, Bainbridge Bikefest is a blast. The grounds are some of the nicest you’ll ever visit. The entertainment is top notch and the hospitality from the staff is unmatched.  Visit bainbridgebikefest.com for further information.