“The best laid plans of mice and men often go awry,” but sometimes you get lucky and the unplanned backup works out even better. After making a decision to postpone the Red, White, Blue, Bikes, Babes and BBQ event after falling victim to the weather forecaster’s latest missed predictions, the postponement ended up being the better option. Though it didn’t rain at all on July 5, the original date of the show, it seems more people were able to join us for the party the following Sunday. The irony of it all, it ended raining like crazy late in the afternoon.

The Red, White, Blue event began 15 years ago at the American Pie in Roswell, GA. It was one of the first events ever produced by Full Throttle Magazine. With only a few location changes through the years it has always turned out to be a great event giving riders something else to do once finished with their usual July 4th traditions.

Only July 12, B3 Bar and Grill in Austell, GA hosted the event presented by Southlands Full Throttle Magazine and sponsored by Lawbike.com. A half dozen vendors lined the front of the building with goods ranging from apparel to jewelry and knives. On the opposite end of the building were the gorgeous bike wash gals, Anita and Stephanie. They were kept busy throughout the day even having to wash a few bikes that came in for the show. Well at least it gave the contestants a good excuse to get their bikes washed.

Reluctant Saints, as a three-piece, filled in as last minute booking since No Sweat who was booked the previous week was not available. They did an amazing job still blazing through practically their whole song list along with a few that normally don’t make the shows. The only thing missing without all the members was the amazing harmonies for which they are known. We’ll give them a pass on that.

There was a great lineup and variety of motorcycles for the bike show. With eight categories with everything from Stock to Radical there was something for everyone to enjoy. Joseph McKeown brought out two great bikes, a CMC version of the Easyriders’ Captain America and a custom built replica of the Billy Bike. He had a great display featuring other recognizable items from the cult classic such as the helmets and jackets.

Mike Janis was the big winner of the bike show, taking his Touring Custom class and also winning Best in Show. His candy red and black 2011 H-D CVO Streetglide is stunning. It came from the factory with lots of extras, but his additions made it even more special.

New to this year’s event was a Beard Contest. Beards and beard products are all the rage right now so it was a great time to add it to the show. With assistance from Michael Watts, three categories were selected: Best Full Beard, Best Baby/ Business Beard, Best Partial Beard, and then of course, Best Beard.

Michael also emceed the event. There was a lot of competition with members of the Beard Sinners Beard Club in attendance, along with a roomful of bearded bikers. Most competitors jokingly asked to not let Brian Cameron of Reluctant Saints compete. For good reason, with his ZZ Top Billy Gibbon’s look, he did win the Best Full Beard. 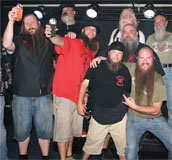 The big winner of the entire day was really all the competitors and everyone in attendance. Every single person in the crowd chanted, “Matt, Matt, Matt,” as Matt Hoover was helped from his wheelchair to the stage to compete. Overwhelmingly, no judges needed as the crowd made the choice evident, Matt was awarded Best Beard. This once again proved the love and support you can expect from the motorcycle community, and the local community of Austell as well. Matt suffered a traumatic brain injury in 2004 and he and his Mom have remained family members of both.

It was cool for Jackyl’s Jesse James Dupree, along with his son Nigel Dupree, Todd Love and other friends to stop by for a visit. This event is Red, White and Blue for a reason. It’s about the love of our country, our families, our friends, and our motorcycle community. We proved all that once again!