Each Memorial Day weekend the Norse god THOR wields his mighty hammer creating Thunder which can be heard across Monteagle, TN. Thankfully, the mythological son of Odin didn’t include the lightning and storms typically associated with him for this Memorial Day’s Thunder on the Rock motorcycle and music rally. All the thunder came from the roar of motorcycles and music rocking the venue.

The concert lineup for the 2015 rally was phenomenal with headliners Craig Morgan, Uncle Kracker, and Blackberry Smoke, along with an incredible group of opening acts. Prior to each headliner taking the stage this year was the launching of a new tradition with the presentation of colors and the singing of the National Anthem. It’s something that has been a huge part of Southlands’ Full Throttle Magazine events and we were thrilled to see it adopted here. Geneva introduced each performer as the crowd proudly stood to salute our Country, its Veterans and our Flag. JD Cable belted out the anthem on Friday night with Kimberly White doing the honors on Saturday and Sunday. Both did an awesome job.

Friday got rocking with the crowd rolling in across the huge property. As the day wore on the stage came alive. Groove Holler, and Davey Smith and the Pearl Snap Preachers, got things started. Then Craig Morgan got the major acts started as he took on Friday night. He rolled through a series of hits including Redneck Yacht Club, Almost Home, and International Harvester.

It was a gorgeous weekend, probably the best weather yet for the rally. Saturday afternoon brought on bike games and the bike show. There was a good turnout for both. While the weanie bite, slow races and tire toss kept part of the crowd, the Full Throttle Magazine crew was busy registering and judging the bikes in the show. The FT staff was not only proud again to be involved in the show, but this time as a sponsor as well. Steelhorse Law sponsored cash for the Best in Show.

There was more great music throughout the day. Entertaining the crowd just as well were the Cherry Bombs. They did a hot dance set but also kept the crowd cool working the bars and keeping the cold Budweiser flowing. Just before dusk there was midget wrestling. That kept the crowd busy before the night’s concert. 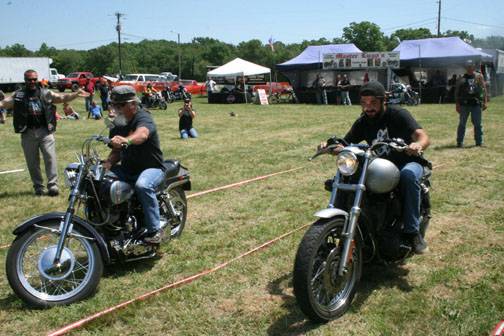 It was Uncle Kracker who rocked Saturday night away. It was a great set with many of the crowd singing along to his first hit Follow Me. He rolled through a list of tunes which had made Top 100 charts, In a Little While, Smile, and Good to Be Me. Kid Rock produced the first album and sang on Good to Me. The big crowd pleasers of the night were Uncle Kracker’s version of Drift Away, and Kenny Chesney’s When The Sun Goes Down, which had featured Uncle Kracker on the original track.

On Sunday there was a mud bog which was a new addition to the THOR lineup. This event has great potential, but on this particular day the bog swallowed almost all who made an attempt. Only a couple were able to blast through the first hole.

On Sunday night Geneva did a great job getting the crowd ready for the much anticipated Blackberry Smoke. With a new album on the streets, “Holding All the Roses”, most fans sang along to every song, old and new. Of course, this author couldn’t wait for Payback’s a Bitch. It should be a #1. It was a fantastic show and a great way to close out the 2015 Thunder on the Rock Rally.